I wasn’t able to sew much in the past few months, and I’ve been very productive this week to make up for it! (I’m blissfully ignoring the fact that Costume College is rapidly approaching…)

I’m planning to attend a party on Saturday with a very specific dress code: black historical clothing. When I saw the invite months ago I figured that I could wear my 1903 mourning ensemble, but now that summer has kicked in on the east coast (US), my will to go outside in that is waning…. It is a fairly lightweight wool, but I found myself yearning for a black cotton ensemble.

I found six yards of a fairly sheer black fabric that heavily resembles a silk or cotton voile at my local remnants shop – unfortunately, it’s polyester, but at least it’s thin! I cut a straight size 14 (knowing that the Big 3 always tell me I’m a 16), and overall it fits very well and was easy to make. I’d like the neckline to be a little lower (so an alteration of lengthening the shoulder-to-bust) and the waist gathering could be a touch lower as well, but I’m not miffed. It’s a really fun and comfortable dress to wear!

I had been planning to wear my Redthreaded short stays with this, but we just finished a big move and I still don’t know where they are! I wore the dress over my 1770s stays in the photos above, and that worked well enough but I wanted a more streamlined look with a more separated bust. I was also really interested in trying out a pair of transitional stays – the form between the conical, very-boned 18thc shape and the streamlined, lift-and-separate Regency shape.

I looked around at a bunch of bloggers that have made them, including:

I was initially really interested in the concept that Cynthia (Redthreaded) discussed – that people took their older conical stays/patterns and just slashed them and added bust gussets. I pulled out my 1770s pair to start patterning based off of shape, and then was lured away by the bust-cups style that Koshka and Gracie made. Whoops. 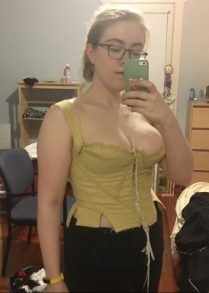 I used the Redthreaded short stays pattern in M as a base for the overall shape, since I knew how it fit me, and mocked up a two piece pattern: one for the torso, one for the bust gusset. I wasn’t sure of the gusset sizing or of boning layout (it did not occur to me to go look back at the blogger’s final results…my brain was on late night sewing mode!)

The photo at left is my second proper mockup; the left side has some boning in a Y shape and the right side doesn’t have any, hence the sagging. I had been hoping that I could make them front-lacing, to save myself dressing pains, but as I went through adjustments it became very clear to me that for the lift and separation I wanted, I would need a busk. So I switched to back-lacing for the final. 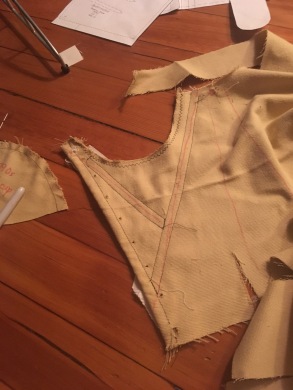 (Photo at right is the same one I am wearing in the earlier picture, just laid out flat. I wasn’t careful about cutting out the tabs; I just cut up to the waist in three places as I was wearing the first mockup, and it didn’t seem to really matter after that.)

Before making the final, I remembered to go look at my reference pictures, and switched the boning placement from the angled Y-bone into a straight bone running from the center of the cup down to the long angled piece. I also added some more at the sides (and of course the back, since lacing), which I had always planned on doing but had been to lazy to do in the toile stage. 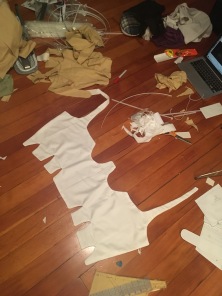 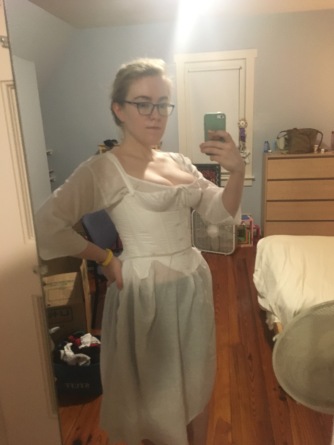 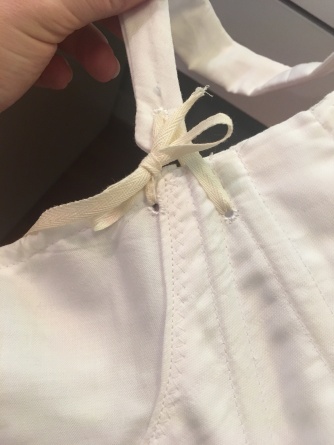 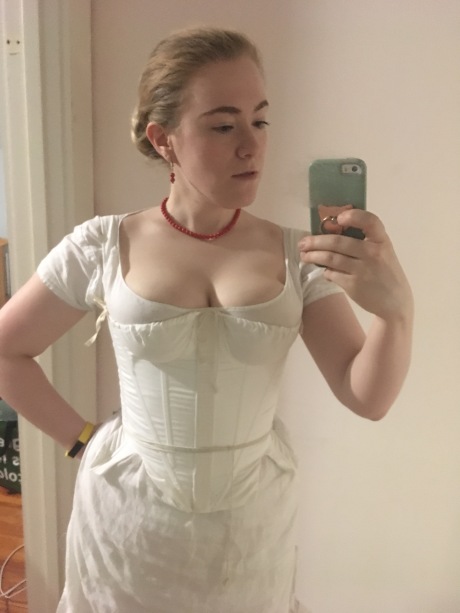 For the photos above, I didn’t have a proper busk, so I slipped in a metal Victorian one as a placeholder. It worked well enough! I finished up the eyelets after that try-on (they’re so tiny, I’m so proud of myself) and then the next morning popped into Home Depot and grabbed a 12″x 1″ paint stick (stirrer?) because they give them out for free. I’ve seen people on the Facebook groups say that they’re a great substitute for a custom wooden busk, and lo and behold, they are totally right. Final product, at left!

Given that I only made two and a half mockups and started from scratch patterning about 10 hours before….I think I did pretty darn well. Personal critiques:

I made these out of two layers of thin cotton sateen & a bunch of 1/4″ plastic cable ties. Most of it was done by machine (and lined the modern way, because I didn’t want to waste time with bias tape when I wasn’t sure they would be wearable), but I did all of the eyelets by hand. I find the hand-stitching soothing, and didn’t want to mess with big metal grommets for this. I would have done the whole set by hand if I had had time!

Last but not least – remember how I started this post talking about an ensemble?

I tried the dress on over my new stays, and they work wonderfully! I lowered the dress neckline a little this time, and you can see how high the busk rides in the left photo. Guess I’ll have to button up a bit!

I watched Festive Attyre’s hair and turban tutorial to get a feel for the hair, and hemmed a long strip of my black fabric to use. I also found an old brooch in my jewelry box – I’m sure it’s not even close to the right era and look, but better than nothing! Now I just have to decide which wig I want to use. Not using my own hair saves an incredible amount of time and stress!

Overall, I am very happy with how this project turned out. I didn’t really expect that I could make a pair that both fit and looked right in the time I had; it was wonderful to power through the night and end up with a solid final product! (I started this at 5pm and finished at 3am the next morning. I’ve definitely made better life choices, but I was extremely determined to make these!)

— edited 6/17 —
Now with party photos! A big thank-you to Nastassia and Caitlin for taking the photos below. You can see the nice curve that the bust cups create… (and potentially – if you zoom in and have a bright screen – how much lower my actual low-bust-line is than the gathering on the dress…) 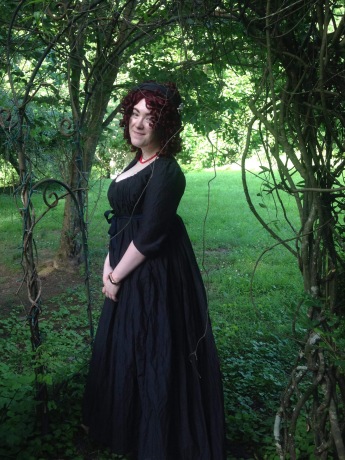 And, of course, a final photo of our group to show how lovely historical black is~