Alright, I’m finally back from all of my conferences! I wrote a lot of this post in advance, but near the end it’ll have the final photos. I’m not very happy with this dress, but that’s what happens when you have to rush! I do think it looked good, but it’s missing so much of what I wanted to add… Anyway. Enjoy!

Time for some ridiculous 1830s style! This will be my dress for Corsets & Cravats in August. It’s somewhat of a ‘tester’ – I’ll be learning 30s techniques and construction using this, and it may not be too fancy. I definitely want to go all out at some point though!

I purchased the Period Impressions 1837 Day Dress sewing pattern – I had tried to find reviews of it but they are sparse and few between. It’s a later 1830s design, right after the sleeves deflated in 1836, and reminds me closely of this lovely dress from the VAM, below. 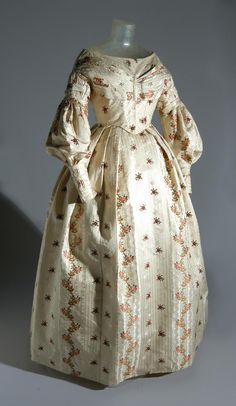 For fabric, I pounced on a lovely christmassy plaid from Fabricmart during one of the silk sales:

…mostly because I’ve always loved this amazing plaid from the Met, ca. 1830, below: 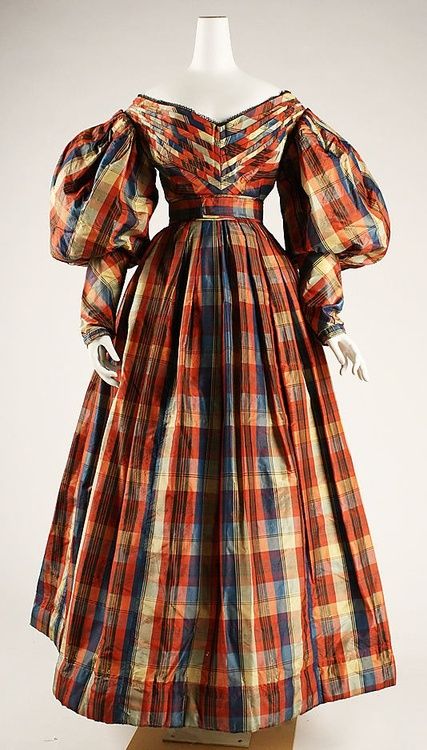 My fabric is dupioni instead of the more proper taffeta, but I love the pattern to bits and the slubs are harder to see through the plaid, so: too bad.

I started off with my basic bodice pieces and found the first inaccuracies in the pattern. First error – the bodice is shaped with a tiny dart under the bust on each side. That’s a holdover from the 1820s, and by the late 1830s it should either be a much longer dart, extending over the bust, or a full seam. (I used it this way anyway, because I’m not planning for this to be super fitted, but it annoys me on principle.) After more research, I found extant gowns with this shaping, but as I said: it’s an earlier feature.

The second error is that it does not feature the curved seams at back, instead giving one solid piece for each side. Those seams, while not essential construction-wise, are present on most if not all gowns in this era, and are often double piped to draw the eye even more. (This I did change.)

THIRD error: The whole point with these immediately-post-gigot-sleeve gowns is that you could reuse the original enormous sleeve easily just by pleating it down. While I’m not 100% sure that all 1837-9 gowns started with the huge sleeve, I think it’s likely that the ivory gown linked above started that way (it’s already a once-recycled gown, as it used 18thc fabric). This pattern instead gives a piece for each ‘section’ of the sleeve, so the pleated part is just a long rectangle, etc., and then you sew it together horizontally to the lower puffed section and so forth.

I didn’t want to make the sleeves that way – I don’t have a lot of time, and trying to fit all those pieces separately sounds more complicated than making a single piece sleeve. So I’m moving my dress timeline backward a bit and making a full gigot sleeve; if I have the time, I’ll pleat it down and move it forward.

I had started by cutting out the solid back piece and flatlining; I then realized I was missing that back curved seam, so I stitched around the line and cut it out before piping it by machine. Then I realized it was super wonky, so I tore it out, piped one side, pressed it under, and topstitched it onto the other piece by hand. That’s probably how you’re supposed to pipe in the first place, isn’t it….Oops.

That gave a much better finish! My piping is a bit large; I’d decided to buy 1/8″ cord because nowhere on the internet did it tell me what size to get! (Still annoyed about that.) The shoulder seams, curves, CF & CB are all done with that thicker cord, and I’m switching to 1/16″ for the armholes. I think I’ll add a 1/16″ to the front as well.

That second pic above is the inside of the back. I had originally planned on making this back opening, but….I want to actually have a dress I can put on by myself, for once! So that seam at back is 1″, and I’ll make do with the 1/2″ allowance I have at front for the hooks and eyes.

At this point, I tried on my Regency short stays in the hope that they’d work – but alas, they project the bust out too straight and not enough to the side. I switched to my later Victorian corsets for fittings.

The bodice went pretty quickly, and I started drafting my sleeves (again with the 1897 sleeve guide! Love that thing.) In the picture above, you can see my black gigot sleeve alongside Orisen’s enormous draped pattern – she still hasn’t finished it, so I’ll have to update you later on that design!

For my part, I drafted a sleeve crinoline based on an extant 1828 pair in the Met. They’re muslin boned with baleen, so I used cotton and zipties. (I had to tape two together to get the circumference!)

I took the shape below (yoga mat for size) and ran a channel through the middle (long ways) for the bone, and then gathered the top and bottom to elastic.

(Sorry, no drawstrings here! I was running low on time and figured they’d be fiddly.) The design worked very well, except that I’d made it too large for my sleeve! I switched back to the dress after this and didn’t have the chance to make a fitting pair, but Orisen did! You’ll see hers later. To make up for the lack of support, I added some twill tapes that attached at the top of the armscye and at the middle of the sleeve, around my elbow. They keep the sleeves from slipping down my forearms at all, which they absolutely would if given the chance.

I went on to the skirt; I referenced Costume in Detail pretty heavily and put in about 4-5 inches of gauging at center back, before pleating the rest of the skirt *towards* the front. Bradfield’s notes show that most 30s skirts were between 130-140″, so that’s what I did. I made it very roughly, however….and in the end, because of my bodice overlap and some waistband weirdness, my gauging did not end up at center back. It’s more than an inch off, and I am ashamed. (But not actually motivated enough to rip it up and redo it. Hah.)

Sleeves done! I figured that if I didn’t have time to make supports, then I could at least flatline them in organdy…but that didn’t arrive in time. I’m sorry to say that they are a single layer of taffeta and nothing else. They’ll stay up for a bit, but they’re kind of wimpy for early 1830s. When I come back to this costume to improve it, I will heavily consider pleating them down for a late 30s look.

I also made the belt then, and somehow it ended up very skinny. I’d been aiming for 1.5″ – I should have gone for 2″ or more!

Costume College had come and gone by this point, and at the Marketplace there I had found a gorgeous vintage collar, quite large, that I hoped would suit this dress. Magically, it does! I’m totally unsure what decade it’s from, but I removed some of the stitching keeping the pleats at back flat and it spread out beautifully. I whipped it onto the neckline and voila!

On to the conference! Orisen and I drove eight hours down on Thursday, and we wore these on Friday for the Evening Sociable. Orisen was a hit, let me tell you! People were referencing her underwear-ing all weekend.

Between the two of us, we had one complete 1830s costume, haha! She made period-correct undergarments based off of the set in LACMA, and I had all the overgarments and correct shoes/stockings/etc. To get the silhouette, I ended up wearing my 1860s corset, a tiny 18thc bumroll over my Edwardian hip pads, and then my super bulky linen petticoat from the 1870s rainbow dress. (Along with chemise and drawers, obviously.) It ended up working well, but what an assortment!

For my hair – which I’d tested earlier in the week with even better results – I separated it into a T part and put the back into a very high ponytail. I braided it and wrapped it around to make a little tower. Next time, I’d like to make some fake hairpieces, but I might change colors soon so that’ll have to wait…. The side curls were done on a very skinny stick curler, and then pinned halfway back up because they were so long. (My hair is quite long all the way around – no bangs or layering.)

(If I haven’t already mentioned this, my wonderful mother made my matching bonnet using Black Snail Patterns!)

You can see in the selfie that my bodice overlapped; it ended up being a bit large. Overall, I enjoy this dress, but I’m sad I had to rush it. For the future, I’d like to pipe and add cuffs, as well as make sleeve supports, but any other fun stuff will get pushed to another dress.