This was a very ambitious project. I’d recently fallen in love with the Late Bustle era, and was invited to be part of a group of the same, inspired by Game of Thrones. (Which I’m not a huge fan of, but hey, anything to make fancy gowns…)

I zeroed in on three Worth dresses, and decided to go for the character Melisandre, as she wears only red.

I armed myself with three Truly Victorian patterns and one Black Snail Patterns:

I didn’t start with the corset, but it makes more sense to talk about it first, so here we go.

I used the Simplicity 2890 pattern because I had it lying around. Again – impatient seamstress. 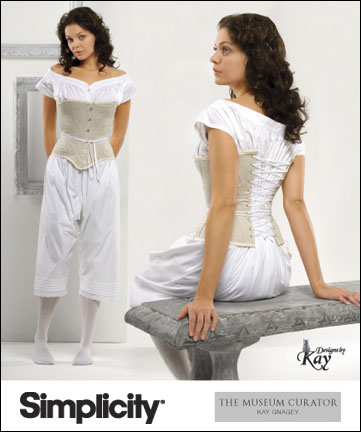 I used a fabric that defies description – it almost looks like 1740s lace style pattern? but obviously very polyester. It was very thin, so I had to flatline it onto a bottomweight twill. That took a while…

I ended up adding a bit more boning than they recommended – trust me, it was necessary.

I finished most of it in a day – all I have left is cutting the actual bones (I shoved placeholders in for this try-on) and binding.

I don’t really recommend this pattern, but for my full thoughts, alterations, etc. you can check out my review here.

All done with Melisandre’s corset! Pretty proud. I had to do all the bindings by hand, so it took longer than expected.

Fabric choices for the trained petticoat. Main body is a heavyweight eggshell linen, and the flounce is a beautiful red silk/rayon jacquard.

Cartridge pleating, for the second time ever.

This turned out really nicely! It’s quite heavy though, thanks to the linen. I ended up having to bustle it up with tacking stitches; the bell skirt that sits above it is NOT made to go over a bustle, so you could see this peeking out the sides of my dress. Rather annoying!

I’m skipping ahead in time here, but I ended up making a second petticoat to go overtop of this, primarily to get a flame-colored effect under the skirt.

The silk taffeta made an absolutely FANTASTIC structured petticoat, and it ended up being really pretty despite the ridiculous bright orange and red.

I don’t have progress pictures of this because I sewed it madly in three hours and didn’t pick up my phone, but rest assured it got made. And works great!

I remembered the obscene difficulty of using the toilet in my 1894 Day Dress with modern underwear, so I did a little research to determine what the best historical equivalent was. And boy, I was so ready to try out using the toilet with split drawers. (Prior Attire has taught me so much.)

I used the Truly Victorian pattern TVE02 – Edwardian Underwear for these, with the justification that 1) I wanted to be fancy, and 2) drawers didn’t really change much between the 80s and the new century. 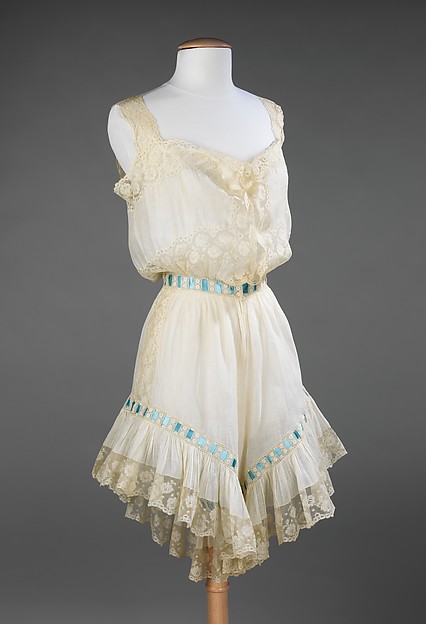 (I had the pattern already because I had used parts of it for the 1894 dress.)

I don’t have a better picture for you than that – oops! Like the bustle, this was a pretty quick project – WAIT. I have photos from the event. Okay, here you go:

(Featuring the chemise made specifically for this costume, but which doesn’t really merit an entry of its own.)
As you can see from these photos, I ended up wearing my Edwardian corset for this instead of the 1890s one I made. That’s because I actually get better waist compression in this one, and it’s more comfortable to boot. I did wear the 1890s one for an earlier event with most of the dress and it worked fine, but I was happier in this one in the end.
And lastly…
Hip Pads
I wore the bodice and skirt out to an event before I made the bustle – sort of as a test-run – and identified a few things to fix. One was that I wasn’t happy with the shape, so an easy fix was to make hip pads for myself. What’s ‘real’ after all?

(Please ignore that non-era-accurate corset. I didn’t want to take it off the dressform.)

I drafted these out of my head, having made bumrolls and hip pads in the past and knowing vaguely what shape and size I needed for this to look good. They snap shut onto each other in back.

Nice shape, eh? I have them stuffed under the sides of a bustle here (a tornure cage that I did not make myself) and then under a single petticoat, and they’re nice and smooth. Girl’s got hips!