It was intended to be suitable for Yubaba from Spirited Away, so I could have an excuse to wear it to conventions.

I detailed the process pretty thoroughly over on tumblr, so I’m copy-pasting it all in here. Anything in bold is stuff I’m writing now for this post.

Part I – skirt and corset

This costume went on a several month hiatus as I slowly released the pent up stress from not being able to understand the skirt. I worked on other projects during the summer and then picked this back up in late August, when I moved to Rhode Island to start grad school.

Finished moving in this morning and broke out my sewing supplies this evening. I’ve entered myself into a costume contest that takes place in a few weeks, so…best get stitching! I have switched up the undergarments for this costume; it’s become apparent to me (finally) that it’s meant to go over a late Victorian corset rather than an early Edwardian S-bend. This corset is by Historical Designs on Etsy – my S-bend will get use later under a planned tea gown ❤️😭 #lining #victorian #historicalfashion #historicalcostume #latevictorian #corset #sewing #cottonprint

/more like i couldn’t decide which silhouette I wanted to run with, and after adding 2″ to the CB of this pattern only to have it ~barely~ meet over my bust….I don’t want to expend the extra energy to figure out how to change it into a pigeon-breast XD

The lining portion here seems pretty clear-cut, but the fashion fabric is a load of pleats, so I had figured I could do with it what I wanted. Now, I think – maybe I shouldn’t!

Yubaba is coming together!! I’ve made several deviations from the original pattern by this point (planned instead of resulting from confusion and ignorance, like the skirt…) – the biggest one is sleeves. The pattern called for very full two piece demi-gigot sleeves, but I decided to try out an 1897 pattern for a leg-o-mutton sleeve instead!

It worked great! I’m very happy with them.

Right now I’m sewing down the backs of the pleats to keep them stable (both the front and back of the bodice is pleated under the yokes). After that’s done, I’ll decide whether I want to rip off the current collar and switch it to the other fabric – it’s currently the flocked cotton corduroy, and to me it looks like a turtleneck sweater because of the lines! 😛 Ew. So i’m considering replacing it with a sateen collar – we’ll see.

After all that, I can finally sew the outer layer to the lining!

I remembered that Yubaba has a huge butt bow, so I have to figure out how I’m going to do that. Not entirely sure I want to? It’s certainly not historically accurate. If I don’t do the bow, I think I might make her belt out of navy velvet.

last night’s 3:30am realization: i made my lining and fashion fabric exactly the same as per usual, but they needed to be mirror images instead because the front of the bodice wraps around to the side. Sooo one of my beautiful darted lining pieces is now inside out on the other side, because I am too lazy to re-cut and re-dart a new piece….. 🙂 🙂

Anyway. Got hella done in the 8hrs I sewed yesterday; full lining and bodice are pinned together and now all edges need to be tucked under and handstitched down. Normally I would just machine stitch it it inside out, but the lining pattern was slightly different from the outside fabric in several spots, and to get it right I’ve decided to do it all by hand.

….i’m just imagining how much easier this whole dress would have been if I had had modern pattern instructions instead of having to muddle through ancient marks and indecipherable language ;_; I feel like the real accomplishment here is not having MADE the dress – it’s having made it from an antique pattern.

If anyone knows how to solve boob spillover in victorian corsets, please lmk!! I can’t loosen the top more when putting it on by myself. If it’s just that the corset is too short…officially switching back to my handmade S Bend until I can make my own Victorian. 😉 (feat. the chemise I made this evening) #corset #corsets #victoriancorset #edwardian #edwardiancorset #sbendcorset #gibsongirl #victorian #historicalunderwear #historicalfashion #sewing #handmade #chemise #simplicity #trulyvictorian #historicaldesigns

Spent 3 hours this morning handsewing the lining to the bodice (and i’m not quite done) and then maybe two this evening, making this new chemise. The Edwardian one I made has too much bulk for this dress, since it was designed for a pigeon breast style!

Spent a good three hours this morning handstitching the lining! Almost done here – just need to figure out why a bit of it is not behaving correctly at CF.

Result of my fiddly bodice work – it secures with hooks at front center, and then the top flap wraps around to more hooks at the side seam and shoulder seam (and neck).

Back views!!! Only thing left to do is sealing off the bottom edge of the bodice. (And decorate…) Thank you @gubyrayle for helping to hook me in and taking photos ❤️ Now I will definitely be at @granitestatecomicon in Yubaba next month!

– Added all closures, tested fit (…gonna have to move the neck ones)
– Fixed a big gap in the lining between collar and CF – this pattern’s lining and outer fabrics DID NOT MATCH UP ???
– sealed up sleeves~
– Made little crescent shaped supports out of scrap fabric and inserted them into the sleeves so they’d stay puffed up 😉

Aaand my roommate helped me into the skirt – I am going to make a new petticoat in the next few days, and I have to add better closures to the skirt as is. Oh – and I have to hem it XD Oops.
Bodice is going to get serged into a nice shape at the bottom and then bias taped with navy sateen. (Is that HA? maybe?)

After all that – time to start decorating! I have soutache and spangles.

(oh man, just remembered the shoulder flounces. uh. will think about doing that)

Finished hemming the skirts! Next: bias tape for the bodice. Please gently slap me if I attempt anything else before that…

had a bad headache most of yesterday, only got little bits done (resewing neck hooks and eyes, whipping on the other shoulder wing) and today i’m laid up with more headaches and brain fog…will try to work some (need to bind the bodice hem, primarily) but idk

Someone slap me, I’m starting the soutache instead of binding the hem 😭

Yubaba’s dress is fully constructed! Optional touches I may do in the next week – more soutache on yoke and overskirt. (Ditched the sequins; the ones I got read as plastic and I don’t want that.)

Not totally happy with the whole thing – the pleats were really a shit show and at this point I’m not even sure that boning the back would help flatten them? Might try it.

But overall, I’m really proud of this! First attempt, and with a really difficult pattern – I’m glad it has a recognizable shape and some cool oomph to it. ☺️

Planning to test out nose and hair tonight – keep an eye out!

Yubaba: half-mourning in the front, party in the back 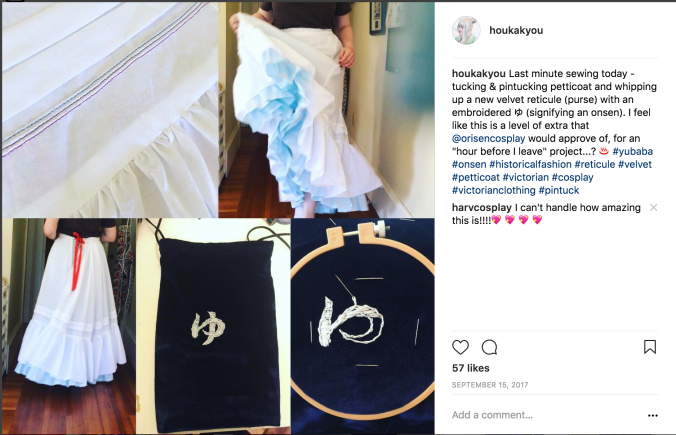 And the moment of truth: I wore this to Granite State Comic Con in mid-September. It worked wonderfully! It was also pretty nice to be comfortable both inside and outside despite the many layers of thick fabric I had on. Score one for cotton!
I don’t even know how I got my hair to look this good.